Now that we have improved our game visually, with particles, we will add some sounds and a music in our project. It’s very simple in Unity but it’s still a very important part of a game.

You will learn where to find sounds and music, pick some, and play them in our game via a script.

Note: Unity 5 has been released with a lot of new Audio tools. However, we will not cover the new features in this tutorial.

Damien (not so) recently participated in an interesting subject on Stack Exchange about this topic.

Based on our knowledge, a game developer can:

Matthieu: I have created some sounds and songs for a short school project made by a friend. I was a drummer at the time, but absolutely not a composer.

However, with the help of Freesound, a bit of inventiveness and a dozen of hours (without knowing any tool — so I just learned how to use Audacity the quick way), I successfully did a (cheap) soundtrack for the whole game.

I wouldn’t recommend that for a song (find a musician and make a deal, it’s way better), but with enough time and a good tool, you could definitely create cool sound effects. It’s feasible: be creative.

For musics, it depends of what you want:

Damien: this is how I met (your mother) the artist Spintronic. I really loved his music. He kindly authorized me to use them in The Great Paper Adventure game.

Assets for the tutorial

Create or find an explosion and a shot sound. If you are lazy, you can use ours:

We will use one of the track of The Great Paper Adventure by Spintronic for this tutorial:

Drag the 4 elements in the “Sounds” folder.

To play a music, simply drag the song into the “Hierarchy”. 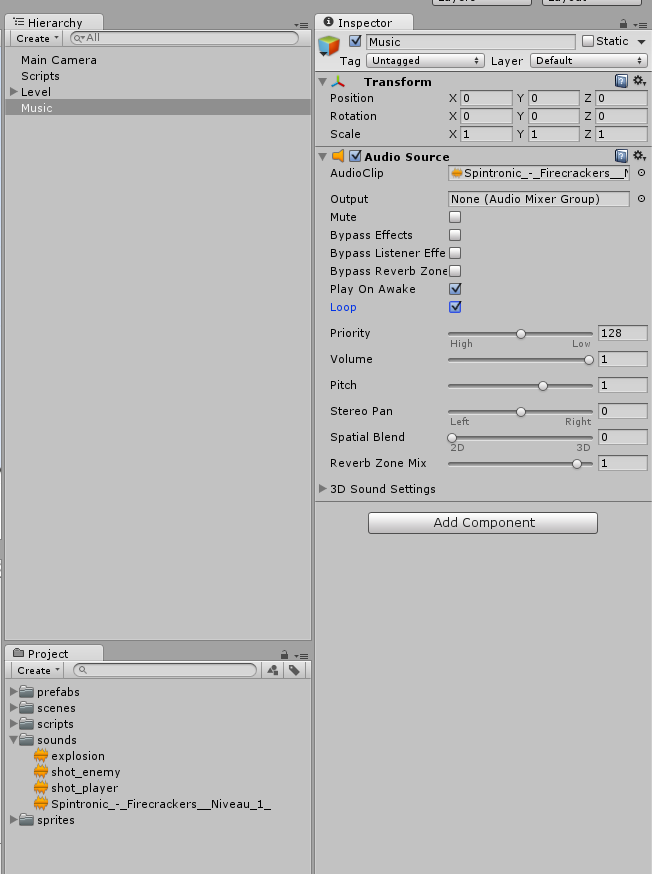 Observe the “Mute” checkbox. It can help when you do a lot of tests.

You could proceed like for the music. But sounds need to be triggered at the right time in the game.

For that, we propose a simple solution. Just like for the “SpecialEffectsHelper” code, we will have a helper script for sounds that you can call from everywhere.

This new script is called “SoundEffectsHelper”:

Add it to the “Scripts” game object, and fill its fields with the sound clips: 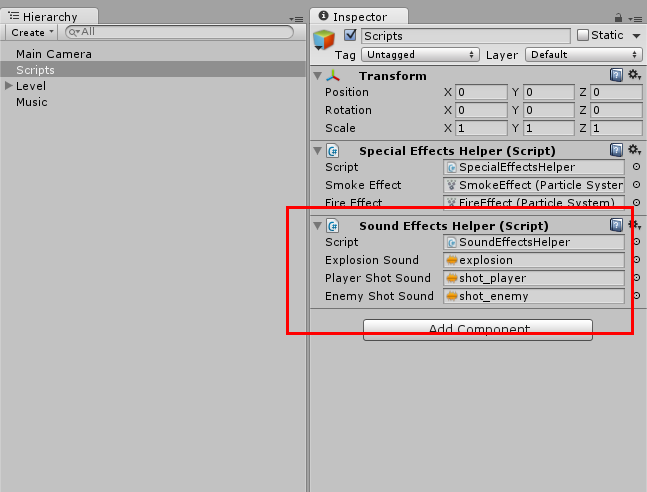 Start the game and listen. Yeah, we have a music and sounds now!

Note: this method is enough for the tutorial or for small projects. For a bigger game, it’s probably too light, as you won’t be able to easily manage hundreds of sounds.

We just learned how to use sounds and music in our game.

We have a pretty good basis for a shmup game now. You can make a longer level and you will nearly get the demo we showed you in the introduction.

You could start making your own graphics and add enemies or background elements. You could even begin to implement a boss at the end of the level. It’s a bit more complex but the challenge and the design decisions are really interesting.

We are far from a complete game, but we will stop here for the gameplay and game stage.

In the next chapter, we will add menus so we can start and restart this hardcore level.